England’s impressive display over 3 and a half days was a vast improvement on the first test but a washed out last day now leaves the last test as a ‘winner takes all’ contest in Auckland. 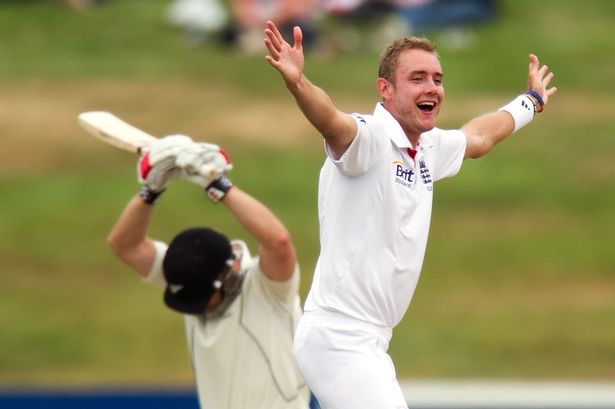 Stuart Broad made a timely return to form taking 6-51 on day 3, after hundreds from Trott and Compton lay the foundations (PC: The Mirror)

A valiant hundred from Nick Compton lead England’s assault with the bat as Trott (121), Prior (82) and Pietersen (73) all followed suit. Compton’s majestic 100 came off 230 balls before he was finally caught off Bruce Martin’s bowling, who took 4-130 and was without doubt New Zealand best bowler. The 32-year-old (turns 33 next month) left-arm spinner bowled well and made the most of a dry surface in his second test. A mature debutante who has been on the New Zealand first-class scene since he was 20 may only get this one chance to shine on cricket’s biggest stage, as talisman Daniel Vettori is expected to return for the summer tests. England also claimed day two, with Prior blasting an attacking half-century and Broad claiming two wickets in two balls late in the day, it was an exciting days cricket for anyone who braved the early hours in England to watch. Broad’s wickets included ex-New Zealand captain Ross Taylor and Hamish Rutherford, who performed well in the warm-up against England and scored a century on Test debut in Dunedin. Cook was busy at slip taking two good catches. New Zealand went into day three trailing by 399 runs with any momentum they gained from the first Test quickly disappearing.

Trott top scored with 121, the 9th century of his Test career (PC: The Telegraph)

Stuart Broad was still in his wicket taking mood from the end of day two and took Man of the Day on the third day with a fantastic 6-51 forcing New Zealand to follow on. Brendon McCullum and BJ Watling were the only really resistance from New Zealand as both made 60’s before being dismissed. All of England’s bowlers looked potent, with only Panesar going wicketless, he did have an economy rate of under 2, however. He was the only wicket-taker in the follow-on by the end of day three, aided by a possible candidate for catch of the year from Ian Bell, diving low to his right to make the grab. That was not all for Panesar, he argued with Captain Cook over the inclusion of a short-leg on day four, with Cook obviously looking for wickets, Panesar’s bowling seem to lose some zip with Sussex teammate Matt Prior having to put a soothing arm around his shoulder at the end of the over. Under Vaughan and Strauss, Panesar was almost completely dependent on the Captain setting the field for him, but under this new reign, Flower and Cook has urged him to set his own fields. A petty little argument that shouldn’t have an effect in the long-term. Despite this, James Tredwell’s fantastic recent form may deserve an inclusion for the last test with Panesar not really taking the wickets required to replaced Swann.

There were no further opportunities to put in big performances as only 35 overs were managed on day four before the last day was washed out by Cyclone Sandra. Kane Williamson and Ross Taylor did show signs of form on day four before the rain came, with Williamson finishing with an unbeaten half-century, the 5th of the 22-year-old’s career. The series stands at 0-0 going into the final Test on Thursday in Auckland.

Joe Root will look to prove he has the class needed to stay in the test side, not just the potential to one day hold down a spot (PC: Metro)

What will definitely be seen as a let off for New Zealand, England’s confidence will be boosted going into the last Test after the abysmal all-round display in Dunedin. Compton looks calm and confident and a big century from Trott will have steadied the side. Broad’s return to form will silence the skeptic’s who think his untreatable heel injury is effecting his play. With the forecast for next week looking dry, England will hope for a big win but more importantly a big performance. Joe Root may be under pressure for a score, with Jonny Bairstow waiting in the wings, not to mention the players that will look for an impressive start to the season to force their way onto the Ashes teamsheet.

The second and third days play also came inside with ‘Test Match Sofa’s‘ 36-hour Cricket Marathon in aid of Comic Relief, which included alternative commentary on this game, the Australia vs India match and Pakistan vs South Africa. It was a very entertaining listen and it may have led to me missing my 9am lecture, but if anyone asks, I was feeling very ill… I did feel like I was cheating on Henry Blofeld, Johnathan Agnew and co. however. South Africa took a 2-1 lead with two games to go in the ODI series. Big hundreds from Amla and de Villiers set up the victory as both teams scored over 300 in a good day for batsmen, Afridi also but in a good performance.